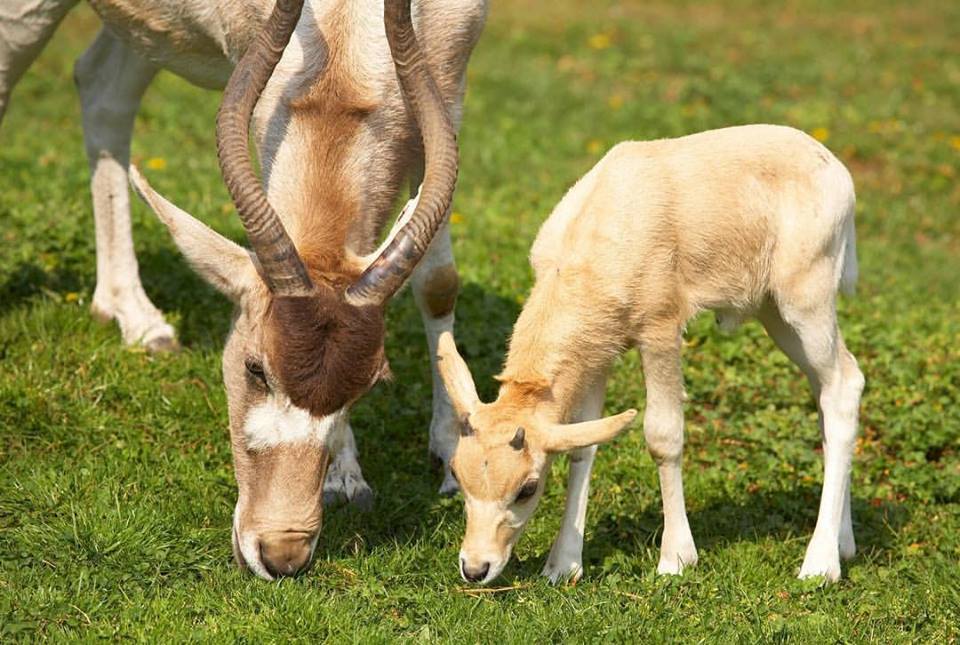 Wikipedia have you bored? We’ll help you learn more about the addax antelope without spending hours on Google.

The addax is also called the white antelope or “screw horn” antelope because of its white coloring and corkscrew looking horns. These twisted horns can range from 22-32 inches on females and 28-33 inches on males. Longest horn length recorded for an addax? 43 inches! Wow, right?

But don’t let the “white antelope” fool you. The color of its coat actually changes with the seasons. In winter, it’s more grey-brown and in the summer, it’s mostly sandy blonde (just like many of our Southern Belles’ blonde hair) to redirect hot sun rays. Their coat length and density help with thermoregulation.

They are listed as critically endangered. In a 2016 report, the IUCN said a survey had found only three in the wild. About 40 years ago, Texas had only two addax, but today, there are over 5,000 on Texas ranches due to conservation efforts by the EWA.

Now this is cool… there are pictures of addax in tombs of Egypt dating back to 2500BC which show us they were partially domesticated. The number of addax captured by a person were considered an indicator of his high social and economic position in the society.

The addax closely resembles the scimitar oryx but can be distinguished by its horns and facial markings. Facial markings include brown or black patches that form an X across the nose.

Because they were once found in the extreme conditions of the Sahara and prefer sandy, desert terrain, they can survive almost indefinitely without water by getting the moisture out of the food and dew that condenses on plants. Addax are able to sense changes in humidity and find places where rain has fallen or vegetation is sprouting. They also have a special lining in their stomachs that stores water in pouches to use when dehydrated. Sorry to do it, but while we’re at it, let’s talk about their pee. It’s highly concentrated to help conserve water!

In 1977 and 1978, two Texas ranches and the Oklahoma City Zoo allowed the mating and reproductive behavior of their addax to be studied. There were 7 adult males, 37 adult females and 27 under the age of one. Two terms for you to know- “Laufschlag” which is a mating kick and “flehmen” which is a behavior in which an animal curls back its upper lip exposing its front teeth, inhales with the nostrils usually closed and then often holds this position for several seconds.

Only the alpha males copulate and they stay close by their pregnant female “friend” to demonstrate courtship behavior.

What are we missing? What do you know about addax that we won’t find on the internet?