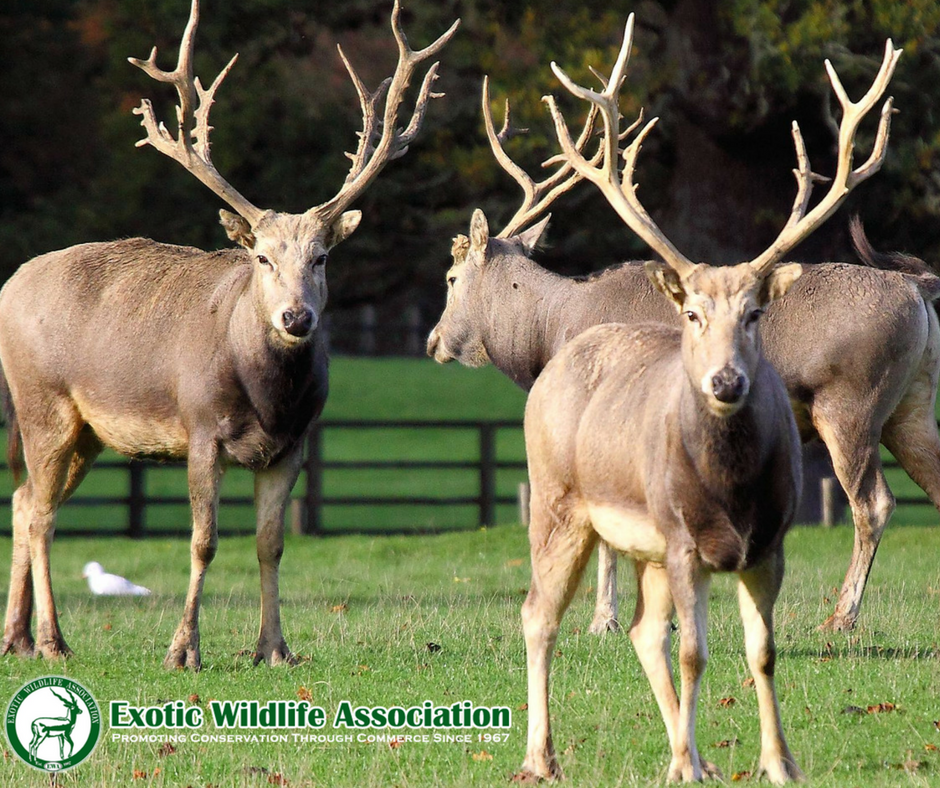 The EWA members are some of the most resourceful ranchers in the country and raise more numbers of rare and endangered animals than any other association in the country.  Those that are truly into raising non-traditional livestock are always looking for new species to add to their ranch that will be unique, add value and beauty to their ranch, be in demand to other breeders and hunting operations and are fairly self-sufficient and hardy.  To find one of the most unique animals of all the exotic breeds, one should look no farther than the Pere David’s Deer.

Beauty is certainly in the eye of the beholder, but this odd-looking deer has a certain beauty that will always draw the attention, of not only those who have never seen a Pere David’s Deer, but also those who have raised them for years.  Those individuals who see a large male for the first time always comment that it appears that they have their antlers on backwards.  The configuration of the antler is what gives a large male a unique beauty unlike any other antlered deer, apart from the Eld’s Deer. The antler of a large Pere David’s male will reach lengths of 25-39 inches.  In the populations located in the South and Southeast, the males will shed their velvet in August and September and carry the antler until they shed them in January or February.

Native to Eastern China, the Pere David’s Deer became extinct in the wild through poaching, depredation, war and human encroachment.  They were reintroduced back into their native land in 1985 but still do not have sustainable, viable numbers.

The largest populations of the Pere David’s Deer are found in the southern part of the United States, primarily in Texas, with some in Oklahoma and Florida.  These deer are a light brown and the males grow long shaggy throat hair in the winter and will weigh 400-500 pounds while the females will weigh 300-350 pounds.  Their preferred habitat is along rivers, marshes or wetlands with an abundance of grasses and trees.  Like elk and red deer, they love to wallow and will do so in cold as well as hot weather.  These deer are very winter-hardy as long as they have adequate forage and trees for shelter.

The Pere David’s Deer is generally compatible with most other animals but must not be pastured with elk or red deer as they will hybridize.  Anyone considering starting a breeding program must take this into consideration and place them in a pasture that has plenty of trees for shelter and shade and a considerable amount of water for wallowing.

The rut in the southern part of the United States takes place in August and September with the calves being born in March to June.  Normally the cows will give birth to only one calf with the gestation period being 280-285 days.

Fencing requirements are about the same as other species of deer.  A seven foot fence is adequate but most ranchers use an eight foot fence.

Over the past few years the population of the Pere David’s deer has steadily increased in the United States as more and more ranchers have become interested in this unique deer.

How the African Black Rhino came back from extinction