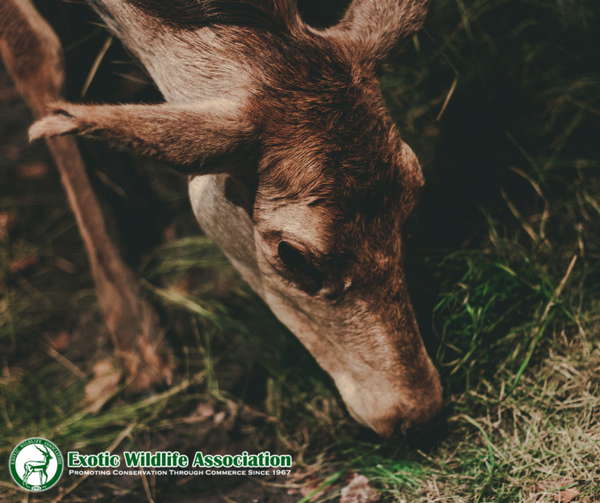 As a research scientist with 40 years of experience in the area of wildlife diseases, I have been regularly disappointed, disgusted, alarmed, and amazed at both the amount and frequency of alleged facts reported on chronic wasting disease (CWD).  These “facts” are based entirely on totally unsubstantiated rumor or—even worse—on horribly misquoted science by misguided or misinformed individuals.

The most recent example of this type of gross misinformation is an article by Joshua Rouse of the Topeka–Journal entitled, “New study suggests humans may be susceptible to chronic wasting disease from deer” (June 24, 2017).  Perhaps Mr. Rouse can be partially excused because of his obvious and understandable ignorance about disease processes in general, and specifically about CWD.  Yet he is guilty of trying to sensationalize the issue by misstating and overstating the results.

Lets begin with the title of his article.  The operative words are “suggests”, “may”, “humans”, and “susceptible”.  The study in question was not conducted on humans or human susceptibility.  A more correct and accurate title would have been “Macaques infected by consumption of CWD-contaminated tissue under experimental conditions”.  Obviously that would be a far less interesting and titillating title, but would have been an entirely factual one with zero speculation.

Next let’s address the study that was discussed—not published—at a 2017 conference.  A news release from the researchers from the Canadian Food Inspection Agency at the University of Calgary reported that 5 of 18 macaques became infected with CWD.  Two were infected by intracranial injection, one by oral exposure to CWD-infected brain tissue, and two by consumption of infected meat.  Any number of species from cattle to cats has been experimentally infected with CWD by direct injection into the brain.  Yet this is a completely abnormal route of experimental infection and intracranial transmission does not occur anywhere in nature.

Another macaque was orally infected by exposure to CWD-infected brain tissue.  One has to question the relevance of this by asking how many macaques in nature eat deer brains, or more importantly, how many humans consume raw deer brains?

In the other portions of the article by Mr. Rouse, he quotes both Darrel Rowledge, director of Alliance for Public Wildlife (APW) and Tim Donges, president of Quality Deer Management Association (QDMA), Bluestem Branch.  Let’s examine each of them and their quotes separately.

In an analysis published by APW, CWD “was first documented in captive mule deer in the late 1960s.”  On the face of it, that is an accurate and often-quoted statement.  What is left out is that the CWD-infected mule deer were in experimental pens at Colorado State University (CSU) and were not captive deer from a private producer as might be implied.  The captive mule deer at CSU were initially from wild origin, so in spite of numerous theories we will never know where CWD actually originated.

In the next paragraph according to the ACA analysis: “estimates show that 7,000 to 15,000 CWD-infected animals are being consumed by humans every year.”  I would like to know the scientific source of those estimates.  But assuming those numbers on CWD consumption are somewhere close to correct, why after 50 years have there been zero cases of CWD in humans?

The APW analysis as quoted by Mr. Rouse states that “these sort of prion diseases are know for jumping species barriers.”  This is a patently false and completely incorrect statement that is undocumented by any science.  Bovine Spongiform Encephalopathy (BSE) is the only prion disease that occurs outside its primary host—not CWD, not scrapie, not mink encephalopathy, not cat TSE, nor Kuru, and not CJD.  Mr. Rowledge is a Canadian inventor, producer, writer, businessman, and public safety analyst.  He is not a disease expert and has no formal training or experience in animal diseases that would qualify him as someone with understanding and knowledge about the actual scientific facts about CWD.  He is also an admitted vocal opponent of the commercialization of wildlife and the legal captive deer industry.

Mr. Tim Donges of QDMA (which is also in strong opposition to the deer farming industry) stated in Rouse’s article “the government has tried several means of containing the disease, including radiation, burning the soil in furnaces and formaldehyde with no success.”  Some of those methods were tried to decontaminate BSE prions, but I am totally unaware of any data in peer-reviewed scientific journals using those methods to “contain” CWD.

Further in the article, Donges stated that “CWD prion can be moved by wind blowing dust or rain water moving contaminated soil.”  This is complete speculation, again not documented by any science.  This is a prime example of the type of rumors which are circulated by those either ignorant or naïve about the facts concerning CWD.

“Mice, opossum, etc. can move the prions”, another statement not supported by published literature, as is “(p)rions can come up though plants and other animals or humans could ingest it.” This has never been shown to occur anywhere outside of hamsters under laboratory conditions.

Lastly, Mr. Donges states, “It is a real possibility that the ‘deer species’ could be extinct decades from now.”  Perhaps he is unaware that CWD is actually a rare disease. From 1998-2011, the cumulative CWD surveillance data from USDA/APHIS/VS reports that 1,015,826 deer were tested and only 4003 were found to test positive. This means that CWD is a disease with a test prevalence rate of 0.4% for the entire US for 12 years.

Maybe Mr. Donges can explain how a disease that infects far less than 1% of a population in the entire US could cause an extinction.  These comments were again from an individual who is actually a real estate agent who has no disease training or experience.

Experimental infections can be very informative, if they are properly designed and properly reviewed.  But things that may be shown to be possible under controlled laboratory conditions, may also have an extremely low or no probability of occurring under natural conditions.  “Possible” in the laboratory does not equate with “probable” in nature.  Also the results of experiments should never be extrapolated to other species and other conditions

On the bright side, toward the end of the article Mr. Rouse was wise enough to include comments from Mr. Shane Hesting, wildlife disease coordinator with the Kansas Department of Wildlife Parks and Tourism.  Quoting someone with actual disease experience inserted some well-needed sanity and realism into the article.  “He (Hesting) cautioned the public not to overreact to the results of the Canadian study saying they haven’t yet officially peer-reviewed and published.  He said a similar study in Colorado failed to produce disease through feeding of CWD-infected meat.”

If the results in the Canadian study are found to be valid and finally published after peer review, there are some encouraging points. CWD was not transmitted to the macaques by blood transfusion or from prion exposure to breaks in the skin.  While macaques are not humans, those results suggest that those two modes of transmission for CWD may not be as possible and important as once thought.

In summary, I would strongly advise that you should remain extremely skeptical and believe nothing that you might hear about CWD, unless and until it can be verified by science.  Caution is key unless the information has been published in a peer-reviewed scientific journal. There are a host of very good reasons why the public holds the press, the TV media, and politicians with distrust and in low regard.  It would serve you well to remember that fact when you hear or read information about CWD.