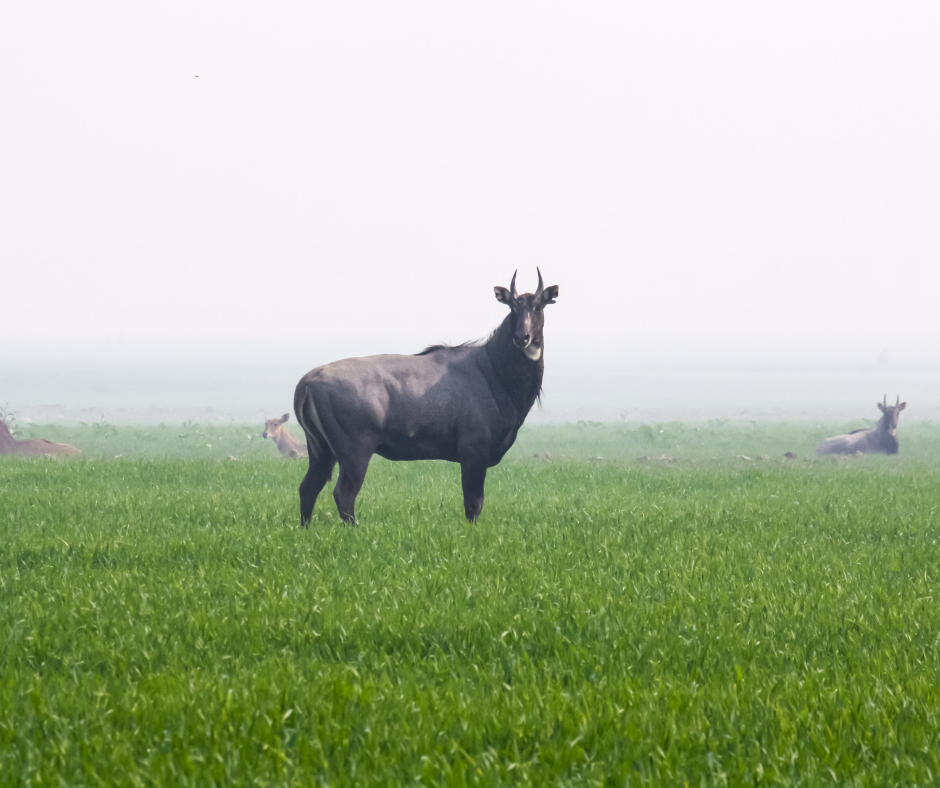 Time for a pop quiz! Think you know your deer, antelope and sheep breeds? Well, we’ll see won’t we! We’ll show you a picture and you guess what it is. Then, we’ll provide you with the right answer and some additional fun facts!

You’ll notice this deer’s long antlers and beautiful white spots on a reddish coat which, is marked white along the stomach, throat, legs, ears and tail. They have a black stripe that runs along their backbone also. The antlers have an upward curve after sweeping backwards and have three tines off the main beam. Originally from India, these are considered the most beautiful of the deer species. They are among the most common of exotics in Texas with 30,000-40,000 free-ranging and 150,000+ on private ranches. And don’t forget, The EWA voted the axis deer as the best tasting game meat!

Aoudad sheep are tough as nails, agile and can handle even the roughest of terrain. Native to Northern Africa, they have been introduced as exotics in the US and other countries.  Also called the barbary sheep, their reddish color blends them into their surroundings. Aoudad are actually listed as vulnerable by the IUCN, but in Texas alone, there are 15,000-20,000 free ranging and 75,000 head on ranches according to the latest EWA census!

These wild goats have long sweeping curved horns. Once only in Italy and the French Alps, they’ve been introduced all over the world. You think the aoudad can handle rough terrain, but the ibex can REALLY handle rough, snowy and steep mountains. They are truly a mountain icon! Once almost extinct, today’s population is 10,000-15,000 pure bred Ibex. If you include hybrid species, the number goes up drastically.

Mule deer are a good ol’ American natives. Clearly, they got their name from their mule-like ears. Their tail has a black tip and their antlers fork as opposed to having one main beam like a white tail. The black forehead always makes them look a bit grumpy, but they are very calm and inquisitive. Many times, they’ll come closer to check you out instead of running away! Some people think they are dumb, but they are just very curious. According to the latest estimates of the Wildlife Management Institute of Washington, D.C., the United States 4.5 to 7 million mule deer. Researchers have recently found the longest large mammal migration in the continental United States: Mule deer migrate 150 miles in western Wyoming each year.

You can thank the King Ranch for the introduction of nilgai into Texas. In 1930, King Ranch released a herd of these antelope; they are now the second most numerous exotic after the axis deer. Approximately 25,000 nilgai are now in Texas. Originally from India, Nilgai literally translates to “blue cow,” but because of the blueish color of males, people use “blue bull” more commonly. For an antelope, these animals are big! Get this, the maximum recorded weight of a nilgai was 679 pounds! Can you imagine?!

When you see a scimitar-horned oryx, elegance is the word that will flash through your head. They are graceful and gentle antelope and some people say, are the animals behind the myth of the unicorn. Their horns are long, curve backwards, ridged and have a sharp tip. They are completely extinct in the wild, but I bet you can guess who has been able to conserve the population. With the help of the Exotic Wildlife Association, Texas once had 32 oryx and now, have over 13,000-14,000 in Texas!

Any American hunter or outdoorsman is familiar with a white tail deer. You’ll know it’s a white tail, if well, it has a white tail! They are super skittish and raise up their white flag (tail) when alarmed to warn other deer of danger. Oh, and they make the craziest “blowing” sound when alarmed! We have an estimated 30 million white tail deer in the United States today, and with  deer predators disappearing, recreational hunting is a major way to keep their population controlled.

The dama gazelle is the largest and most rare of the gazelles. They are critically endangered and while there are only 300 left in the wild, Texas has over 1,300-1,500 thanks to the EWA’s conservation efforts. Their horns are ringed and curved to look like the letter “s.” It’s interesting to note that their long legs aren’t just for show; the length provides extra surface area for their bodies to dissipate heat in order to stay cool in the hot desert.

You can find a ton of information on the addax in this great post we recently published. You’ll hear the addax referred to as the screw horn because of their corkscrew-looking horns. With only 100 left in the wild, Texas has over 7,500. And I’m sure you can guess it, but just like the scimitar-horned oryx and dama gazelle, the EWA took these critically endangered animals and brought back up their population. You may also see a resemblance with the scimitar-horned oryx, but the addax has a brown or black “X” across its face.